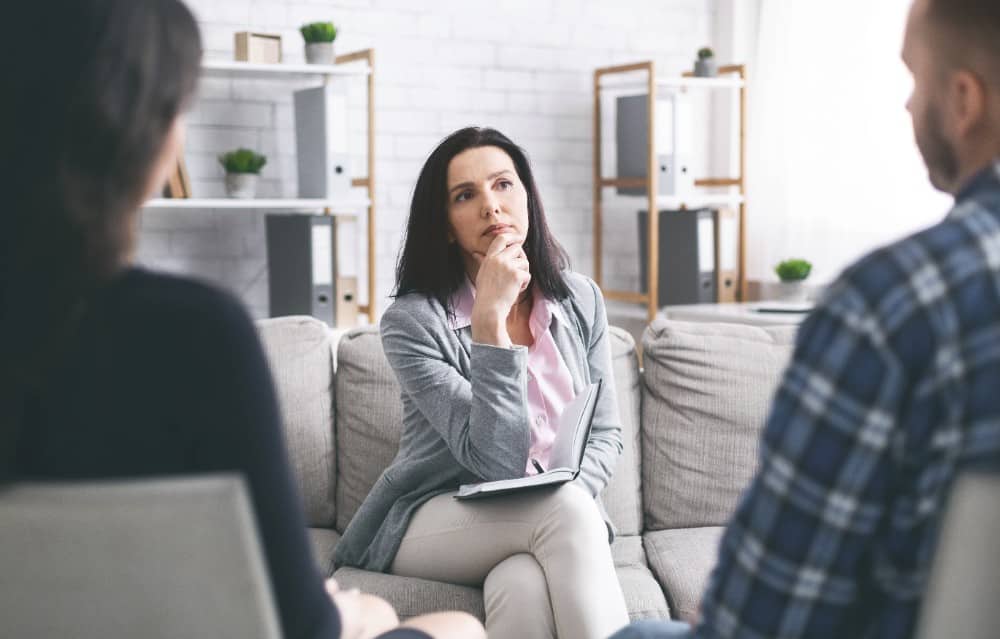 Psychotherapy is often an integral part of addiction treatment. According to the National Institute on Drug Abuse, more than half of people with substance use disorders also have co-occurring mental health issues, such as depression, anxiety disorders, schizophrenia, bipolar disorder, PTSD, ADHD, borderline personality disorders, and others (Connection Between Drug Abuse and Mental Illness). These conditions often drive addictive behavior and generally make recovery harder, so treating co-occurring disorders is essential.

Therapy is often beneficial for family members of people with substance use disorders, too. Living with someone with an addiction can be stressful and a therapist can help you cope in a healthy way. There are commonly relationship issues involved with addiction as well, such as dysfunctional family dynamics, codependent, or abusive relationships. Being willing to participate in family therapy can make a big difference in your loved one’s recovery. However, many people don’t know what therapy is really about and they may fear it unnecessarily, to the detriment of all involved. The following are some common misconceptions about psychotherapy.

“Therapy is about blame.”

A lot of people are afraid of therapy, especially family or couples therapy because they believe it’s about assigning blame. They may fear that a loved one who goes into therapy will suddenly blame them for all their problems. While it’s true that problems often arise from unhealthy relationship dynamics, it doesn’t necessarily follow that anyone is to blame. And even if that were true, assigning blame doesn’t help solve the problem. Individual therapy is about helping people better manage their own thoughts and emotions and helping them relate to others more effectively. Family therapy is largely about helping families communicate better and maintain healthy boundaries. If you feel threatened by any of those aims, it’s a pretty clear sign you could benefit from therapy.

“Therapy is just talking about your childhood.”

Many of us have the idea that when you go into therapy, you lie down on the couch, the therapist says, “Tell me about your mother,” and then you spend the next 10 years talking about your childhood. This idea is largely the result of the psychoanalytic school that was dominant for much of the twentieth century. While psychoanalysts still practice, most therapists are now more heterodox, using different methods according to each client’s needs. Many borrow techniques from cognitive behavioral therapy, or CBT, or use other methods backed by research. Often these methods don’t require much insight from your childhood and focus more on what you think and feel in certain situations, such as when you feel the need to drink, or how you react to a loved one’s substance use.

The idea that you stay in therapy indefinitely is another holdover from psychoanalysis. Psychoanalysis combs through vast amounts of data, looking for information relevant to the client’s current problem. Because modern methods are typically more targeted and results-oriented, you can often see results in a matter of weeks. So, for example, maybe social anxiety drives your drinking. Maybe, you want to socialize but you feel paralyzed in social situations, so you drink and it gets out of control. Perhaps your childhood had something to do with that anxiety, but a CBT therapist will focus on the here and now. You will likely address questions such as, “What are you thinking about, specifically, before, during, and after social interactions? Are those thoughts reasonable? How could you test them? What are some more reasonable beliefs to replace them with?” and so on. In this way, you get results much faster and you may only need to be in therapy for a few months.

“You can achieve the same results with a pill.”

We live in a time when antidepressants proliferate and many of them are advertised on TV. The idea behind antidepressants and other kinds of medication is that mental health issues are caused by chemical imbalances in the brain—if you fix the imbalance, you fix the problem. However, in reality, it’s not nearly so simple. Your thoughts, beliefs, emotions, environment, and physiology are all connected in complex ways. Just feeling better won’t necessarily solve your problems. Say, for example, that you’re in a relationship with an emotionally abusive person and you’re depressed. Feeling depressed in that situation is a normal reaction. Taking an antidepressant might help you feel a little better but it doesn’t solve the underlying problem. You either need to change the relationship or leave the relationship. For many people, medication will be part of treatment but it often doesn’t get at the underlying causes.

A lot of people believe therapy is just common sense; they think you’re paying someone 80 dollars an hour to tell you life is tough. Sometimes your therapist will tell you things that will seem obvious in hindsight but then the question becomes if it was so obvious, why didn’t you think of it on your own? We’re often terrible at understanding our own motives. A therapist’s job is not necessarily to tell you what’s wrong with you and how to fix it but rather to ask the right questions that will lead you to insights on your own.

The idea that therapy is for weak people is especially common among men. Men are often raised to be self-reliant and not to show emotion. As a result, they are much less likely to seek help for problems such as anxiety and depression, and more likely to self-medicate with drugs and alcohol. In reality, asking for help when you need it is a symbol of strength. It shows you have the courage to do the hard thing.

Therapy is an important part of recovery for many people but unfortunately, those who need it most often resist it because of these common misconceptions. A good therapist—meaning one who is both capable and a good fit for you—can make a huge difference in recovery and in life. You just have to be open and willing to engage. At Steps Recovery Centers, we understand that addiction is usually the result of emotional pain. We offer a supportive environment to help our clients recover. To learn more about our programs, explore our website or call us at 385-236-0931.